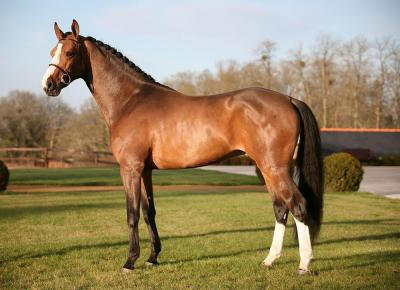 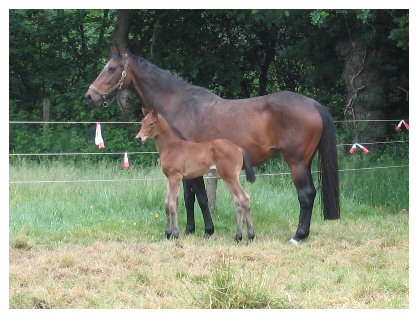 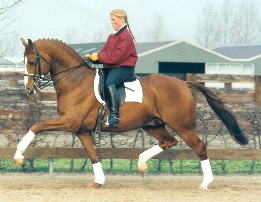 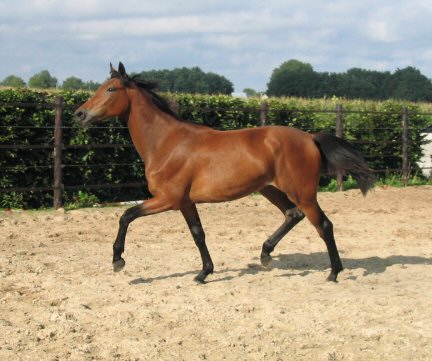 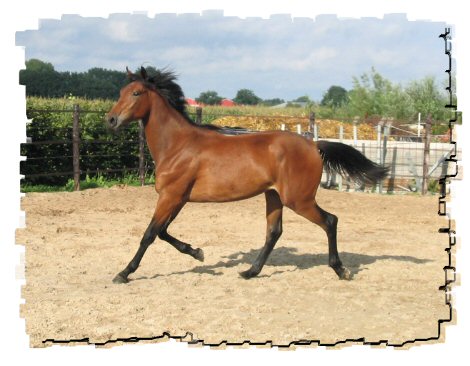 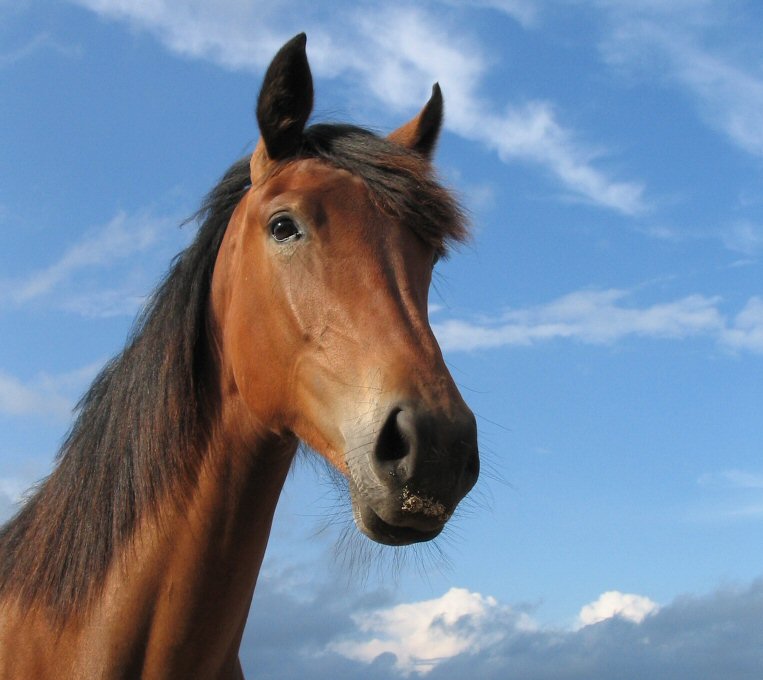 Raliena's family provided the following sporthorses with their achievements. The line is based on a Gelder line. They all want to work for you. 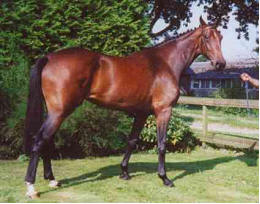 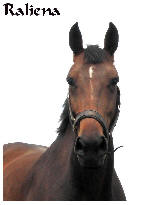 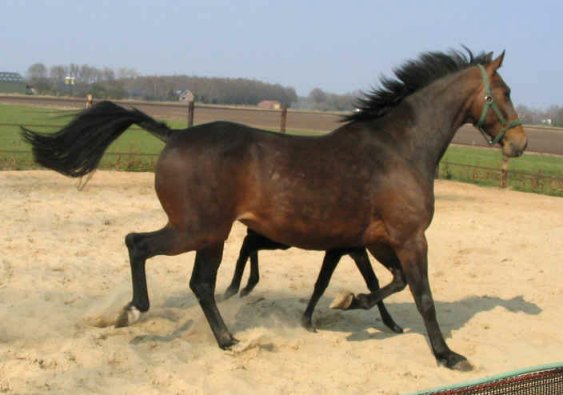 Raliena is the 2nd foal bred by us from the Keur Preferent mare Lady W. Raliena is a strong mover, with powerful movements and she has got her first foal in 2003 by the thoroughbred stallion Stravinsky XX. Who was trained at the Prix St George level.  Raliena has started training in 2003 and she has shown much progress and also she received her Keur predicate in December 2003 after successfully completing the EPTM test with a good walk, canter and a 9 for take off.  Raliena descends from the Performance breeding family 1631.

Her mother is the keurmare Lady W who scored 78,5 points at the EPTM test (Stationsmerrietest) in Drachten and that was at that time the highest score!! Lady W is sold to LaPrairieAire in Canada and is still very successful as a broodmare. The full brother of Raliena, Unescoba won the 2002 yearling competition in Washington State and also won the USDF Breeder’s Colt/Gelding Championship. And last but not least he also became Reserve Grand Champion of the whole show. In 2004 he got the ster predicate in BC, Canada. This shows that Lady W is a great broodmare and her 2002 foal by Orame earned a 1st Premium at his keuringen in Alberta, Canada.

Her half brother Pipkin, Inferno X Farrington (1997) is trained in the Netherlands and competed in dressage at the M level (3rd level), jumping L level before he has been sold in 2002 to Sweden were he is now Internationally competes show jumping under Malin Baryard-Johnsson. He did placed himself 10th in the Warm Up Class on December 15th 2005 in London, where he beated Arko II, Luidam, Eurocommerce Lanapoule. At the Artctic Equestrian Games in Norway he placed 4rth at the qualification class for the GP.

For more photo’s see the album, you can click at the bottom of this page.

Raliena has a lot of Amor in her pedigree and Ladykiller XX who both were great sires. Amor blood is to be found in a lot of good dressage pedigrees.
In 2004 Raliena got a beautiful bay filly by Houston. And in 2005 Raliena has got a filly of Turbo Magic (Cabochon x Cocktail x Kaiserstern XX). Photo’s of her progeny underneath.
Raliena has a filly from Houston on May 10th 2006. Photo's are to be seen underneath. She is bred again and declared in foal to Uptown (Kennedy Ubis) In 2008 a colt by Houston and now bred in 2009 to Amadehus (Holsteiner name Amago) 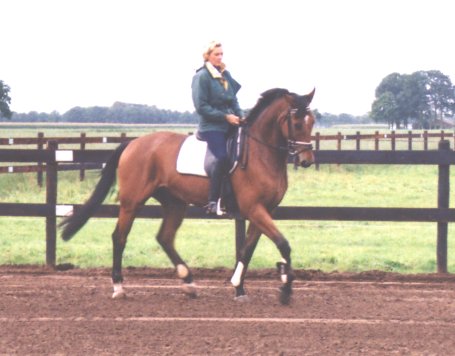 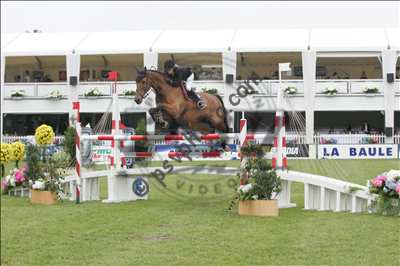 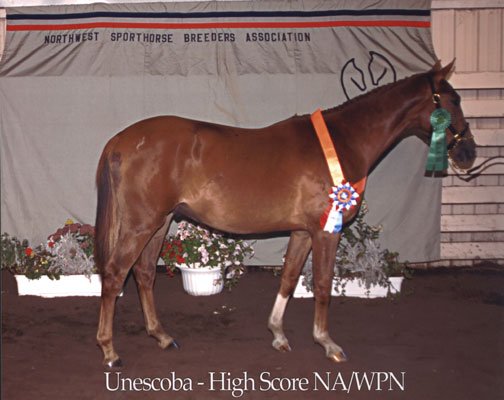 Will be used for dressage and broodmare in the US. 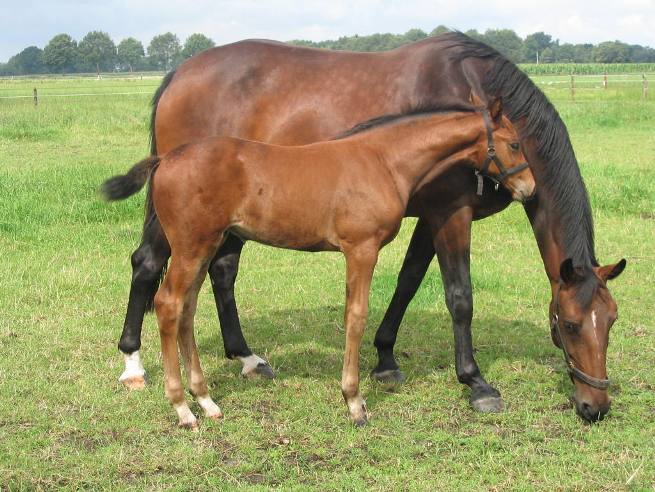 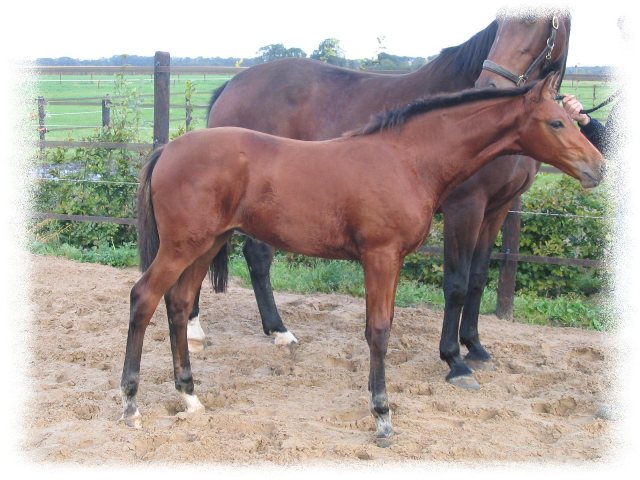 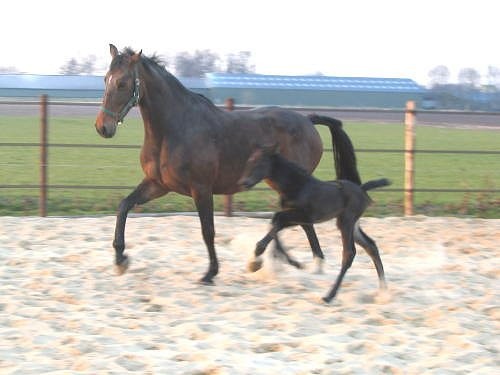 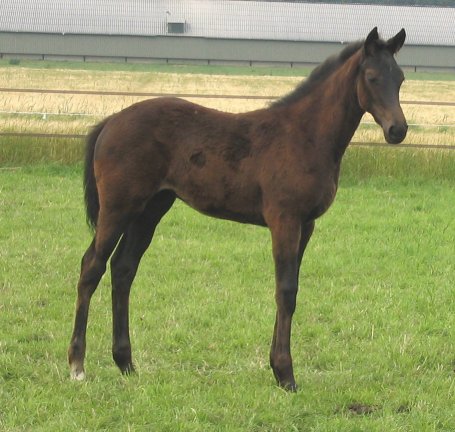 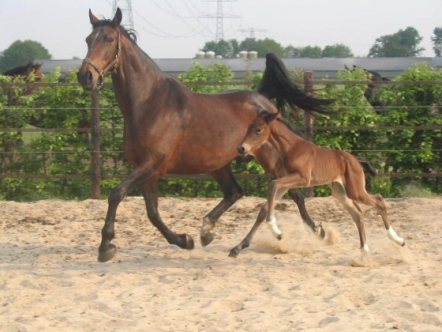 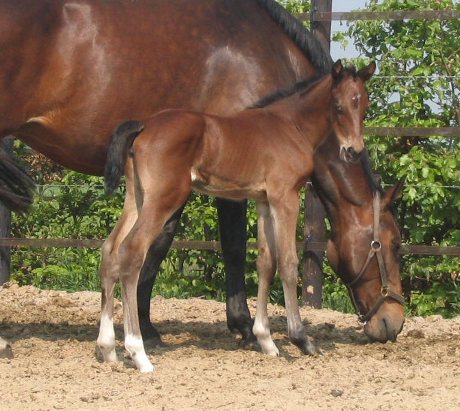 She can move !! She has a very athletic body and she has a sensible character.